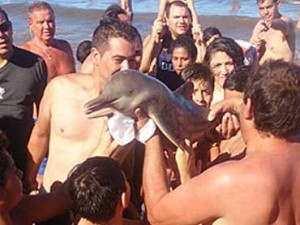 Clicking selfies can be dangerous, as was proven by an incident in Argentina where a baby dolphin, belonging to an endangered specie, died on a beach last week. The endangered animal was taken out of the water for beachgoers to click photos (selfies) and pat the animal. The dolphin died unable to breathe outside of its natural habitat.

The incident, even though occurred in Argentina, is relevant in the US as well, where a number of beachgoers are also in the habit of playing with ocean animals. This incident highlights why it is important to not get into direct contact with animals and how harmful it can be for sea creatures to be taken out of water.

While most publications are calling it a murder, this sad event is of huge concern for everyone. The incident occurred at a beach in Santa Teresita and has received huge negative reactions from all corners. The Argentine Wildlife Foundation (AWF) released a statement urging beachgoers to not take dolphins outside of the water and to return these animals if found near the shores. The original statement (not in English) can be found here.

Argentina is known for La Plata dolphins that are also called Franciscana dolphins. These dolphins are only found in Brazil, Uruguay and Argentina with even less than 30,000 remaining in the wild.

What makes these dolphins unique is the fact that La Plata dolphins are the only kind of river dolphin to have inhabited saltwater. This specie of dolphins is considered ‘vulnerable’ and is on the list of threatened species.

The International Union for Conservation of Nature (IUNC) states that there are several threats to the dolphins including gill nets. Such nets are not only harmful for dolphins but also for other animals found in the oceans. Marine mammals often get attached to the nets causing injuries and fatigue.

However, this is not it. As evident from this incident, swimmers and curious beachgoers are also a threat to the ocean life. Not only do they pollute water, but they also get in direct touch with sea creatures, often causing harm to them. The incident has also resulted in several people urging beachgoers to start rallies to educate others about how important it is to save marine life.

Video footage of the incident is available on YouTube and shows the dolphin being pulled by a man. surrounded by a crowd, curious to see the animal. The dolphin, measuring only a few feet in length, is eventually left in the mud to die and can be seen lying there without any movement. What’s more saddening is that nobody puts an effort to return the dolphin to the ocean.

A statement from AWF reads, “The potential for recovery of this species is very low. The Franciscan, like other dolphins, can not long remain above water. It has a very thick and greasy skin that provides warmth, so the weather will quickly cause dehydration and death.”

The incident has received flak from animal activists and general public, calling it inhuman and an act that should be condemned. Some of the Twitter comments read,

“You must have literally no brain whatsoever to think it’s a good idea to pass a baby dolphin around to take selfies.” @nesswilliamsx

“i vote we pass around the baby dolphin people amongst ourselves until they also die. [SIC]” @Brocklesnitch

The statement from AWF further reads,

“This incident should serve to remind people about the need to return these dolphins to the sea if one is found outside of the water. It’s fundamental that people help rescue these animals because every Franciscan has value.”

Animal organizations and activists all around the world are using this and other similar incidents to educate people about the importance of animals and how and why they should be saved. While some also question the falling humanity in humans, there is a dire need to step up and take responsibility.

Why You Should Use Best Infographics